In short, VHDL is a computer language used for designing digital circuits.

VHDL is an event driven, parallel programming language. While it isn’t suitable for creating programs that can be run by a CPU on a computer, it’s great for creating the actual CPU. It’s a Hardware Description Language, which means that it can be used for the designing digital logic.

Consider the above illustration. Inside the CPU chip there are lots and lots of mostly digital electronic circuits (middle). These digital circuits can be shown using a schematic diagram (right). When creating an integrated circuit chip, like the CPU, we have to start by creating the logical circuit diagram to the right.

It’s a fair assumption that such circuit diagrams are created in some kind of schematic editor, but this isn’t how it’s done. The circuits are described in a textual language like VHDL.

Instead of drawing the exact circuits in a schematic editor, we use VHDL to describe the desired behavior of the circuit. The VHDL code can then be converted into an exact schematic in a process called synthesis. The synthesis tool is a software application which takes the VHDL code and tries to find a possible solution to the behavior you have described.

If successful, the output from the synthesizer will be a netlist which in turn can be viewed in a schematic editor.

While the netlist gives an exact logical description of the circuit, it doesn’t say anything about the physical implementation. To derive a precise description of the physical layout, the netlist is run through a process called place and route, or PAR for short. The router will try to allocate the elements from the netlist to physical components on the target device. It also needs to route wires between all the components. It’s a giant puzzle which the router has to solve! 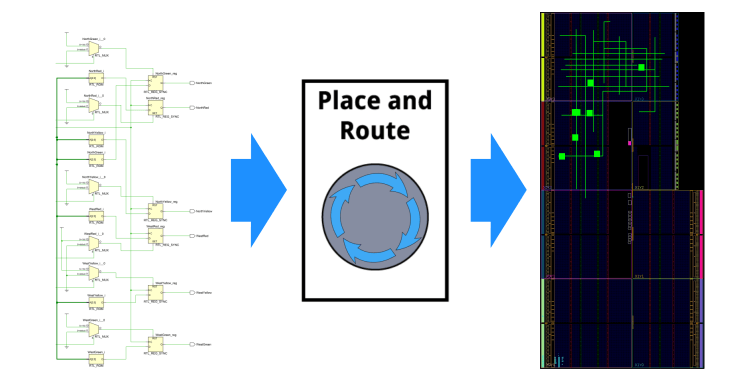 So, What is VHDL?

It’s a sort of programming language which is used for creating digital logic for integrated circuits.

Enrollment opens on: To be decided.